The acquisition, which Rakuten hinted at last week, is part of the Japanese company’s push to grow its base beyond its domestic market and hopefully, become a global player. Having made some $1.2 billion acquisitions to date along these lines, this is Rakuten’s most ambitious move to date.

However, investors are dubious that the company can absorb yet another foreign acquisition, much less one the size of Ebates, despite Rakuten’s strong cash position.
Then there is the ever-present Amazon, which dominates the e-commerce market in the U.S. Few believe it will falter in the face of Chinese giant Alibaba, much less a Rakuten-Ebates combo.

Not surprisingly, Rakuten says it is undaunted. For starters, it has assembled a very interesting mix of acquisitions. There is messaging app Viber, which it purchased for $900 million in February, the Canadian ebook offering Kobo, Spanish video service Wuaki.tv, Viki, a digital content platform and Buy.com.
Now it has picked up Ebates.

Wo immer auch Rocket hin will 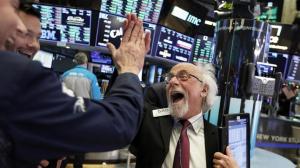