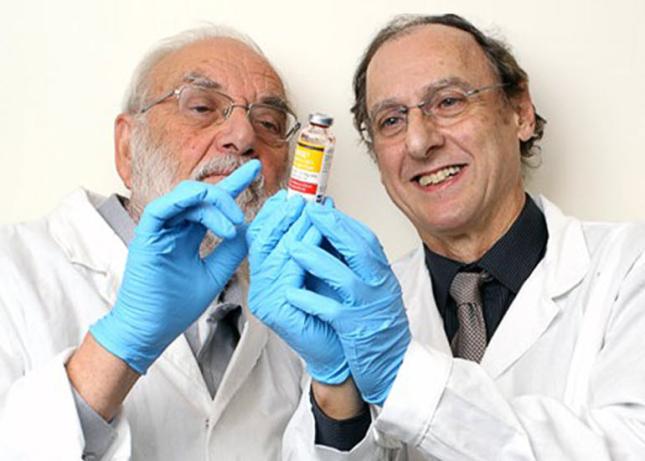 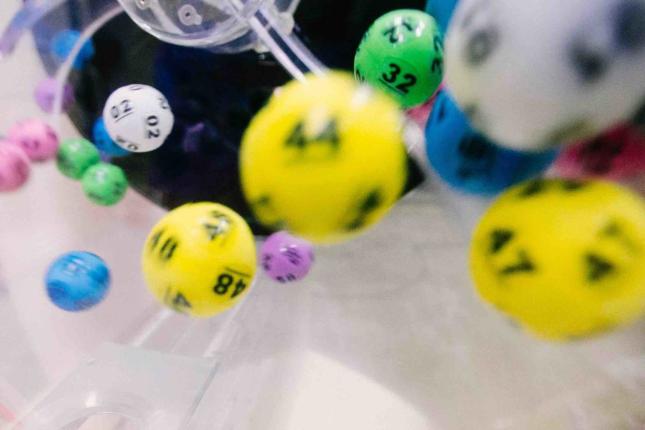 Vancouver, British Columbia--(Newsfile Corp. - May 26, 2020) - Sienna Resources Inc. (TSXV: SIE) (FSE: A1XCQ0) (OTC Pink: SNNAF) (the "Company") is pleased to announce it has acquired the Kuusamo battery metals project (the "Project") which is comprised of two exploration "reservation" properties located adjacent to and near EMX Royalty Corporation's (NYSE: EMX) Kaukua platinum group elements (PGE) royalty property in Finland, which is being advanced by Palladium One Mining Inc. The highly prospective Kuusamo project hosts similar styles of mineralization located within the same mafic intrusive complex and along trend of the mineralization at Kaukua. Both the Kuusamo and Kaukua properties show Ni-Cu-Co-PGE enriched sulfide horizons near the base of a mafic intrusive complex. Geologic maps of the area depicting this horizon show that it extends for nearly 30 kilometers along strike within the EMX reservation areas. 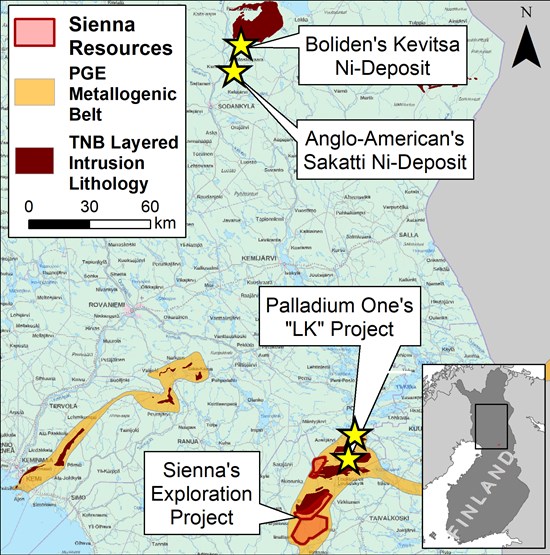 Sienna and EMX have been working together to advance the Slättberg Ni-Cu-Co-PGE project in southern Sweden, a relationship that will now extend to Finland.

Jason Gigliotti, President of Sienna Resources, stated, "We are very pleased to acquire this exciting PGE-Ni-Cu-Co project in Finland. This project is directly bordering Palladium One's project that has produced impressive results to date. We are proud to say our partner is EMX, a NYSE listed mining company, who we believe is one of the most respected companies in the market with some of the best geologists. We have a great working relationship and look forward to developing this new project as well as the Slättberg project. Sienna will be very active this summer at a time when the mining market is generating robust upward momentum."

Kuusamo Project Overview. Ni-Cu-Co-PGE mineralization on the Kuusamo property is hosted by the Koillismaa Layered Igneous Complex ("KLIC"), a 2.4-2.5 billion year old layered mafic intrusive complex located in north-central Finland. The KLIC forms part of an east-west trending belt of similar intrusions and nickel, copper and PGE deposits that cross through Finland and into Russia.

Ni-Cu-Co-PGE-enriched magmatic sulfide mineralization occurs near the base of the KLIC and has been mapped and drilled throughout the area. The Kuusamo Project covers substantial parts of the base of the KLIC and records show that at least five target areas have been drilled historically within the Kuusamo Project over the past 50 years, with most activity taking place in 1973, followed by drilling in 1997 and again from 2000-2005. However, almost all of the historic drilling was shallow, with most holes having reached depths of only 50-75 meters. Multiple phases of airborne and ground geophysical surveys have also been run across portions of the Project, with the data having been compiled by and acquired from the Geological Survey of Finland (GTK). 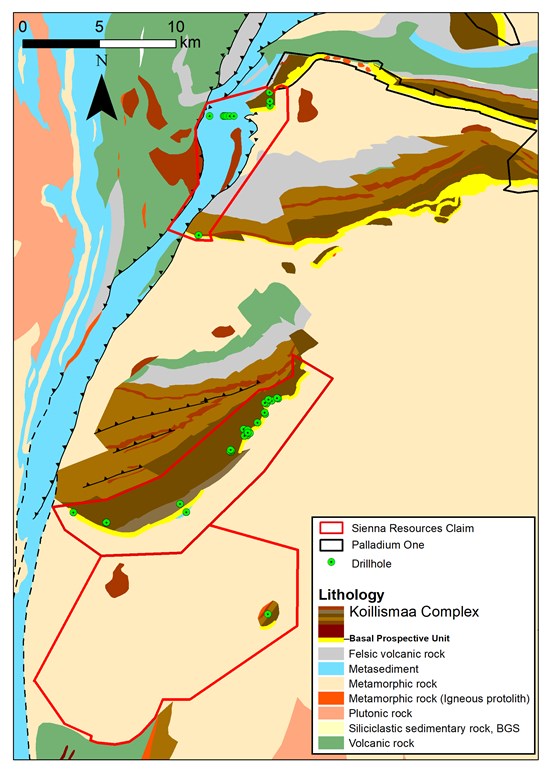 EMX and Sienna will leverage this historic information and apply modern and updated geologic models to continue exploring the historic targets at deeper levels and to generate new targets on the Project.

Summary of Commercial Terms. Sienna can earn a 100% interest in the Kuusamo Project in Finland (the "Project"), subject to a 3% NSR royalty to EMX by:

If Sienna satisfies the conditions of the option agreement and elects to acquire the Project, EMX will receive annual advance royalty ("AAR") payments of US$25,000 commencing on the first anniversary of the option exercise date, with each AAR payment increasing by US$5,000 per year until reaching a cap of US$75,000 per year.

Under certain conditions, 0.5% of the 3% NSR royalty retained by EMX can be repurchased.

Modifications to the Slättberg Option Terms. In addition to entering an option agreement for the Kuusamo project, EMX and Sienna have also modified the terms of the Slättberg Option Agreement. The original option period will be extended to October 31, 2020, subject to the following conditions:

If Sienna satisfies the conditions of the modified option agreement and elects to acquire the Slättberg project, EMX will receive annual advance royalty ("AAR") payments of US$25,000 commencing on the first anniversary of the option exercise date, with each AAR payment increasing by US$5,000 per year until reaching a cap of US$75,000 per year.

EMX will retain a 3% NSR royalty on the Slättberg project, 0.5% of which may be repurchased under certain conditions.

Management cautions that past results or discoveries on properties in proximity to Sienna may not necessarily be indicative to the presence of mineralization on the Company's properties. The technical contents of this release were approved by Greg Thomson, PGeo, a qualified person as defined by National Instrument 43-101.

To view the source version of this press release, please visit https://www.newsfilecorp.com/release/56516