Bernin (Grenoble), France, October 15th, 2019 – Soitec (Euronext Paris), a world leader in designing and manufacturing innovative semiconductor materials, today announced consolidated revenues of 139.0 million Euros for the second quarter of FY’20 (ended September 30th, 2019), up 46.4% compared with 95.0 million Euros in the second quarter of FY’19. This is the result of a 40.0% growth at constant exchange rates and perimeter1 as well as a positive currency impact of +4.6% and a scope effect of +1.8%. The scope effect is related to the acquisition of Dolphin Integration assets in August 2018 and to a lesser extent to the acquisition of EpiGaN in May 2019.

Paul Boudre, Soitec’s CEO, commented: “We achieved a very strong second quarter with organic sales growth reaching 40%. This performance was notably boosted by the confirmed success of our radiofrequency products, whether 200-mm wafers or even more dramatically 300-mm wafers. This provides evidence of the traction generated by the deployment of advanced communication protocols, in particular 5G. In light of this performance, and despite overall challenging environment, we confirm our full-year guidance.

During the quarter we decided to increase our production capacity for POI products designed for RF filters, following increasing demand from our customers. This is an important step in our strategy to expand our technological footprint beyond our SOI core business.” added Paul Boudre.

Sequentially, second quarter FY’20 revenues were up by 16% on a reported basis compared to the first quarter of FY’20.

200-mm wafers are made of products for radiofrequency and power applications. In the second quarter of FY’20, 200-mm wafer sales rose by 17% at constant exchange rates, compared with the second quarter of FY’19. Driven by a solid growth in RF-SOI wafers and continued success in Power-SOI wafers, 200-mm sales increase reflects a combination of higher volumes and a more favorable product mix.

Compared to the second quarter of FY’19, additional volumes of 200-mm wafers sold essentially came from our Simgui partner in Shanghai.

The strong boost in 300-mm wafer sales was generated by the fast-growing consumption of RF-SOI 300-mm wafers (in addition to demand in 200mm) by several Tier 1 fabless and foundry customers who are serving still growing 4G market and deployment of first generation of 5G networks and smartphones. 5G communication standards require significantly increased RF components such as Antenna Switches, Antenna Tuners, LNA’s (Low Noise Amplifiers) content where RF-SOI has become the industry standard.

In the meantime, the adoption of the FD-SOI technology continues to be driven by the strong value it brings to various applications in automotive, AI, IoT smart home, industrial devices and chips used in 5G communication.

We also observed higher sales of Photonics-SOI wafers for silicon-based optical transceivers were supported by the demand for increasing data transmission speed and cost-effective optical transmissions required for the new generation of data centers.

Royalties and other revenues

On September 13th, 2019, Soitec announced an increase in its production capacity of innovative piezoelectric-on-insulator (POI) substrates at Bernin III to meet growing customer demand for smartphones’ 4G/5G RF filters. 4G and 5G networks are using an increasing number of frequency bands to enable high speed data transmission. As a result, smartphones must integrate a higher number of filters with enhanced performance to ensure signal integrity and reliable communication. POI brings combined performance and integration to smartphones’ 4G and 5G filters for mass markets, offering built-in temperature compensation and allowing the integration of multiple filters on a single die.

The 7th SOI Consortium Conference was held in Shanghai on Sept 16-17 with the record number of almost 500 participants on each day.

The conference speakers on the first day confirmed progress of first wave adoption of FD-SOI with Samsung and GlobalFoundries presenting expanded foundry offerings as well as end customers such as NXP, Rockchip and Sony having multiple FD-SOI  based devices already on the market for Edge AI, IOT, Automotive and Industrial applications.

The second day was fully dedicated to deployment of 5G with unique value proposition of solutions based on RF-SOI and FD-SOI presented by companies across full value chain: GlobalFoundries, TowerJazz, STMicro, ChinaMobile.

Soitec continues to expect FY’20 sales to grow by around 30% at constant exchange rates and perimeter1.

This document was prepared by Soitec (the “Company”) on October 15th, 2019 in connection with the announcement of the sales figures of the second quarter of fiscal year 2019-2020.

Your attention is drawn to the risk factors described in Chapter 2 of the Document de Référence.

The Company does not undertake any obligation to update or make any correction to any forward-looking statement in order to reflect an event or circumstance that may occur after the date of this document. In addition, the occurrence of any of the risks described in Chapter 2 of the Document de Référence may have an impact on these forward-looking statements.

To listen to the 6:15pm conference call, the audiocast is available in live and in replay at the following address: https://channel.royalcast.com/soitec/#!/soitec/20191015_1

First half FY’20 results are due to be published on November 27th, 2019 after market close.

About Soitec
Soitec (Euronext, Tech 40 Paris) is a world leader in designing and manufacturing innovative semiconductor materials. The company uses its unique technologies and semiconductor expertise to serve the electronics markets. With more than 3,500 patents worldwide, Soitec’s strategy is based on disruptive innovation to answer its customers’ needs for high performance, energy efficiency and cost competitiveness. Soitec has manufacturing facilities, R&D centers and offices in Europe, the U.S. and Asia.

Soitec and Smart Cut are registered trademarks of Soitec.
For more information, please visit www.soitec.com and follow us on Twitter: @Soitec_EN

#  #  #
Soitec is a French joint-stock corporation with a Board of Directors (Société Anonyme à Conseil d’administration) with a share capital of € 65,234,492.80, having its registered office located at Parc Technologique des Fontaines - Chemin des Franques - 38190 Bernin (France), and registered with the Grenoble Trade and Companies Register under number 384 711 909.

1 At constant exchange rates and comparable scope of consolidation; scope effects relate to the acquisitions of Dolphin Integration assets in August 2018 and EpiGaN in May 2019, both included in the segment Royalties and other revenues.


2 The EBITDA represents the operating income (EBIT) before depreciation, amortization, non-monetary items related to share-based payments, and changes in provisions on current assets and provisions for risks and contingencies, excluding income on asset disposals. Concerning FY’19, the impact in equity of the first time application of IFRS 15 is included in EBITDA. This alternative indicator of performance is a non-IFRS quantitative measure used to measure the company’s ability to generate cash from its operating activities. EBITDA is not defined by an IFRS standard and must not be considered an alternative to any other financial indicator. 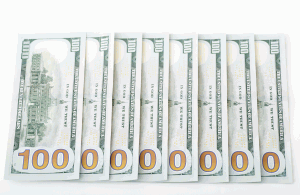