WILMINGTON, Del., May 15, 2019 /PRNewswire/ -- DowDuPont (NYSE: DWDP) today announced that Nicholas C. (Nick) Fanandakis will retire as Executive Vice President effective July 31. Mr. Fanandakis is a 40-year DuPont veteran, who served as the company's CFO through 2017, when E.I. du Pont de Nemours and Company merged with The Dow Chemical Company. He continued to serve as CFO of the DuPont legal entity within DowDuPont until 2019. He has played a key role in the DowDuPont separation process into three companies, Dow (the former materials science division and now an independent company), Corteva Agriscience (the agriculture division) and DuPont (the specialty products division), which concludes on June 1.

DowDuPont CEO Ed Breen said, "On behalf of our Board of Directors and the entire company, I want to thank Nick for his great dedication and extraordinary service. Nick is responsible for countless achievements during his long career at DuPont, and he has shown tremendous leadership in the work we have done over the past three years to complete the DowDuPont merger and deliver on our plan to create three industry-leading, independent companies. We wish Nick and his family all the best in his well-earned retirement."

Mr. Fanandakis' career at DuPont began in 1979 in the Petrochemicals Department. In the years that followed, he served in a variety of positions across the company's divisions before taking on a series of key business leadership roles, focused primarily on the Industrial Solutions, Chemical and Applied Biosciences markets. Mr. Fanandakis became DuPont's CFO in 2009. He was instrumental in DuPont's transformation, overseeing the reshaping of the business portfolio, including the acquisition of Danisco, sale of the coatings business, and the spinoff of the chemical division. He also devoted considerable time and energy to developing and mentoring his team, many of whom are on the leadership teams of Dow, Corteva and DuPont.

About DowDuPont
DowDuPont (NYSE: DWDP) is a holding company comprised of the future Corteva Agriscience™ and DuPont, which are expected to separate on June 1, 2019, creating two strong, independent, publicly traded companies in the agriculture and specialty products sectors, respectively. Each will lead their industry through productive, science-based innovation to meet the needs of customers and help solve global challenges. DowDuPont completed the separation of the materials science business through the spin-off of Dow Inc. (NYSE: Dow) on April 1, 2019. For more information, please visit us at www.dow-dupont.com. 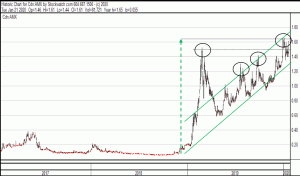